TIES THAT BIND unveils the 2021 selection 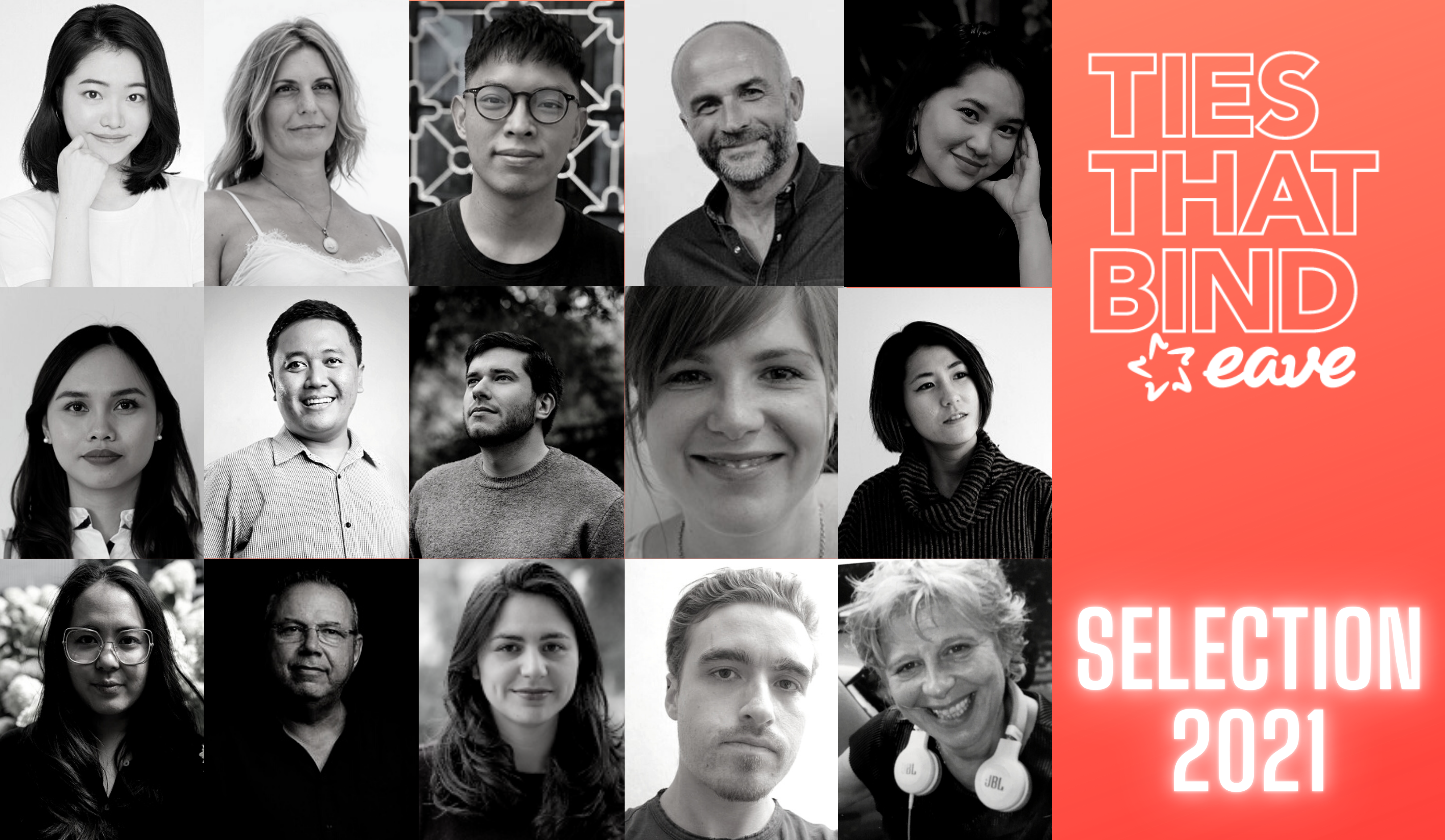 For its 13th edition, TIES THAT BIND (TTB), the leading workshop programme connecting professionals from Asia and Europe, announces the selection of 25 participants including directors coming from 14 countries.

TTB takes place over a year through 2 workshops offering comprehensive knowledge of the European and Asian film industries and markets. The participants benefit from high-level development under the guidance of top-notch experts from both continents and have the opportunity to meet with key decision makers during the online edition of ATF - Asia TV Forum & Market (Singapore), and FOCUS ASIA, the Industry Section of the Udine Far East Film Festival (Italy).

The first workshop will take place online over 2 weeks during November 29 – December 3 and December 6 – 10, 2021. The second workshop will take place in Udine between April 25 – 29, 2022. The participants will work together in a group led by EAVE graduate Jonas Weydemann (Weydemann Bros., DE) and TTB graduate Bianca Balbuena (Epicmedia Productions, PH). The two group leaders will guide the participants’ discussion and analysis of each other’s projects from both an Asian and European perspective.

Furthermore, TTB is partnering with SPM and ATF. The inaugural SEAScreen Project Market (SPM) will be launched at the Asia TV Forum & Market / ScreenSingapore (ATF/SS) on 1st December 2021 with its selection of 15 feature film and television projects slated for financing and co-production meetings with decision makers across ATF/SS. Formerly known as the Southeast Asian Film Financing Project Market (SAFF) which ran from 2015 to 2021, the event is now relaunched to include serialised content as well as feature films across all genres such as animation, factual entertainment, and digital shorts. SPM continues SAFF’s long-term partnership with TTB and will virtually co-locate its project selection with TTB’s own selection each year on the ATF Online+ platform, where interested co-producers and buyers are encouraged to schedule meetings with the curated projects.

Project: Sheep in the Forest by Tian Guan

Project: RA 8491 or How We Recall Lost Memories in Transit by Austin Tan

After closing the call for the Co-Production Forum with a successful record number of over 430 submissions, WEMW launches a complete programme of Inspirational Labs, a series of mini-workshops meant to stimulate producers to develop new content, explore new business models and discover new markets.

The WEMW Inspirational Labs, run in collaboration with leading training programmes and international partners such as EAVE, will offer a deeper insight on TV series content, animation production, impact & outreach strategy, independent online distribution, and on the 2022 East & West spotlight markets. These new activities will be based on active participation and will have the main goal to offer to all participating professionals an impact on their future company business model. The final selection will be primarily based on the applicant’s profile and motivation, and up to 5 EAVE graduates from Europe and Canada will have the extraordinary opportunity to join physically the labs and the full programme of WEMW!

- it is possible to apply to max. 2 different labs, but it will be possible to attend only one Inspirational Lab;

- in case you already applied to other WEMW activities you can still apply to the Inspirational Labs.

In order to submit your application and the required materials you need to create your own account and fill in the online form following this link https://vp.eventival.com/trieste/2022

Please mention you are an EAVE graduate in your profile or motivation letter!

The selection will be announced late December.

In case of selection in one of the labs, the participation fee is 200 EUR, including accreditation, tuition fee, lunches and access to the on-site and online WEMW programme.

Have a look at the WEMW Inspirational Labs and find the one that suits you best!

in partnership with CEE Animation Workshop

ANIMA SPIRIT is designed as an entrance door for experienced producers and film companies coming from live action or documentary, wanting to discover the exciting and complex world of animated film production. The Lab is hosted by the CEE Animation Workshop team and led by experts Jelena Popović (NFB, Canada) and Jean Francois Le Corre (Vivement Lundi!, France). It will combine group work, individual consultancies, and lectures on financial and creative aspects of animation production. More info HERE

in partnership with MIDPOINT Institute

COLD OPEN will once again select international producers, with a background in feature films, who aspire to shift to drama series content. The programme will be led by MIDPOINT Institute's tutors and experts, and will include lectures, group sessions and individual consultations, aiming to supply hands-on skills of development, production planning and financing of serialized drama content. More detailed info HERE

Danielle Turkov & Amy Shepherd from Think-Film will lead a guided co-creation workshop, in which selected fiction and documentary projects develop impact loglines, goals and key action steps. The main objective is to enhance participants’ understanding of the value of impact and what it can achieve for their productions and society, introduce them to a range of tools they can use to design and deliver policy impact, give participants specific project advice and guidance. More detailed info HERE

The lab is a unique opportunity to raise awareness of the diversified VOD landscape and discover new distribution models within the European digital market. The series of lectures will be led by EUROVOD experts and representatives of some of the most active and successful European VOD platforms, and will help to inspire attending film companies to plan ahead the digital distribution of their films.

A complete journey through the main funding, distribution and market opportunities offered by the 2022 WEMW spotlight territories. All lectures, individual consultancies and exchange sessions will feature leading key players from these industries and will tackle a wide range of topics, from working with equity investors to the independent documentary scene in the US.

All applicants will have the opportunity to virtually meet with the WEMW team on November 29 from 10.00am to 11.00am to get more info about the Inspirational Labs and the submission process. To ensure your attendance and get the direct link to the INFO DAY, you need to register by writing to programme@wemw.it no later than November 26.

We remind that WEMW 2022 will grant physical access to the market venue only to the participants selected to one of the Inspirational Labs or to any other section in the programme. All other film professionals will be offered the possibility to enjoy the rich programme of WEMW and access the new WEMW Digital Universe by requesting an online accreditation from early December.

More information are available at www.wemw.it 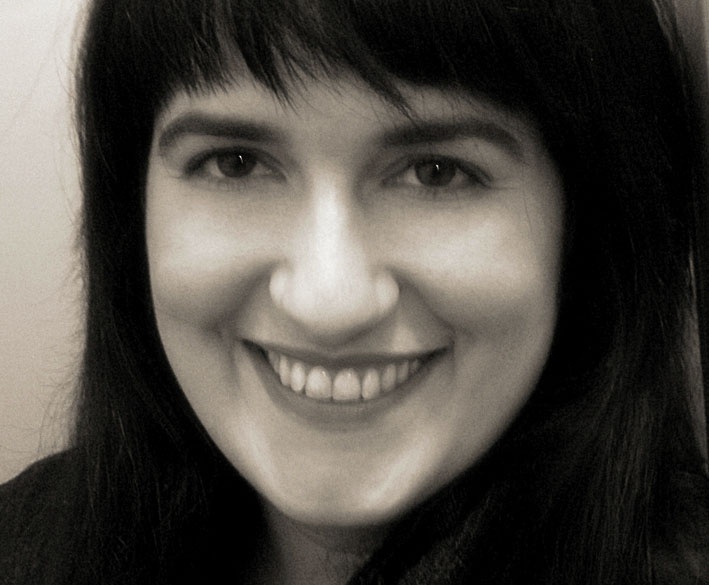 Croatian film producer, co-founder of the production company Studio DIM and beloved member of the EAVE community, graduate of the EAVE Producers Workshop, Darija Kulenovic Gudan has passed away in Zagreb aged 49.

Darija was one of the leading female film professionals in the region, producing films such as Aleksi by Barbara Vekarić, Night Ships by Igor Mirković, My Grandpa is an Alien by Marina Andree Škop and Dražen Žarković, as well as the documentary series The Housing Issue by Silvana Menđušić, the drama series In Treatment by Tomislav Rukavina and Marko Škop, children's series Laboratory at the End of the Universe, RECs, Njama, Njam, and many others. Her latest project was feature omnibus Heavens Above by Serbian director Srđan Dragojević, on which she worked as a coproducer.

Darija’s power and strength as well as her warm smile will be missed by us all.

Our heart and thoughts go out to her family, friends and all those who have admired her.

The whole duration of the workshop will take place in Hotel San Pedro de Timote (Florida, Uruguay), a remote finca turned into a hotel, surrounded by the wilderness and beauty of the Uruguayan countryside.

The 14 participants who have started the journey together online will finally meet in person in this exceptionally immersive workshop composed mainly by group work conducted by the two PUENTES group leaders Agustina Chiarino (Mutante Cine, Uruguay), and Jean des Forêts (Petit Film, France).

Thanks to EAVE’s partnership with the Marché du Film, PUENTES participants are accredited to participate in the upcoming edition of Ventana Sur taking place onsite (in Buenos Aires) and online from November 29 to December 3.

PUENTES 2021 is the 11th edition and second one under the guidance of PUENTES head of Studies Fernanda del Nido.

EAVE would like to express its gratitude to its workshop 2 partners; Egeda Uruguay, MEC-DNC-INCAU, Montevideo Audiovisual and MUTANTE Cine for making this physical workshop possible, its workshop 1 partners Fondo Audiovisivo FVG, IDM Südtirol and MiC and to Creative Europe-MEDIA and IBERMEDIA for their year-round support.

EAVE Producers Workshop 2021 culminates in Barcelona with a bang

The EAVE 2021 Producers Workshop’s third and final session in Barcelona, Spain (November 8-15) will welcome a record number of 102 leading international decision makers (complete list below) to discover in physical or online meetings the 51 top producing talents from 37 countries and discuss the 31 fiction, documentary and serial projects developed during this year’s EAVE Producers’ Workshop.

Catalan industry professionals are joining the plenary sessions, in addition to which a group of 8 selected Catalan producers will work on their projects in group work sessions lead by EAVE Group Leader Riina Sildos (Amrion, EE).

The 102 decision makers joining physically or online are:

Various special guests from Europe’s leading co-production markets EAVE has partnerships with will be available for one-to-one meetings:

The EAVE 2021 Producers Workshop’s third and final session in Barcelona, Spain (November 8-15), is organized in partnership with the City Hall of Barcelona, Ministerio de Cultura y Deporte, the Government of Catalonia through the Catalan Institute for Cultural Companies (ICEC) and in collaboration with Catalan Films, Catalunya Film Commission and Barcelona Film Comission

TIES THAT BIND ON DEMAND in Taiwan kicks off in November! 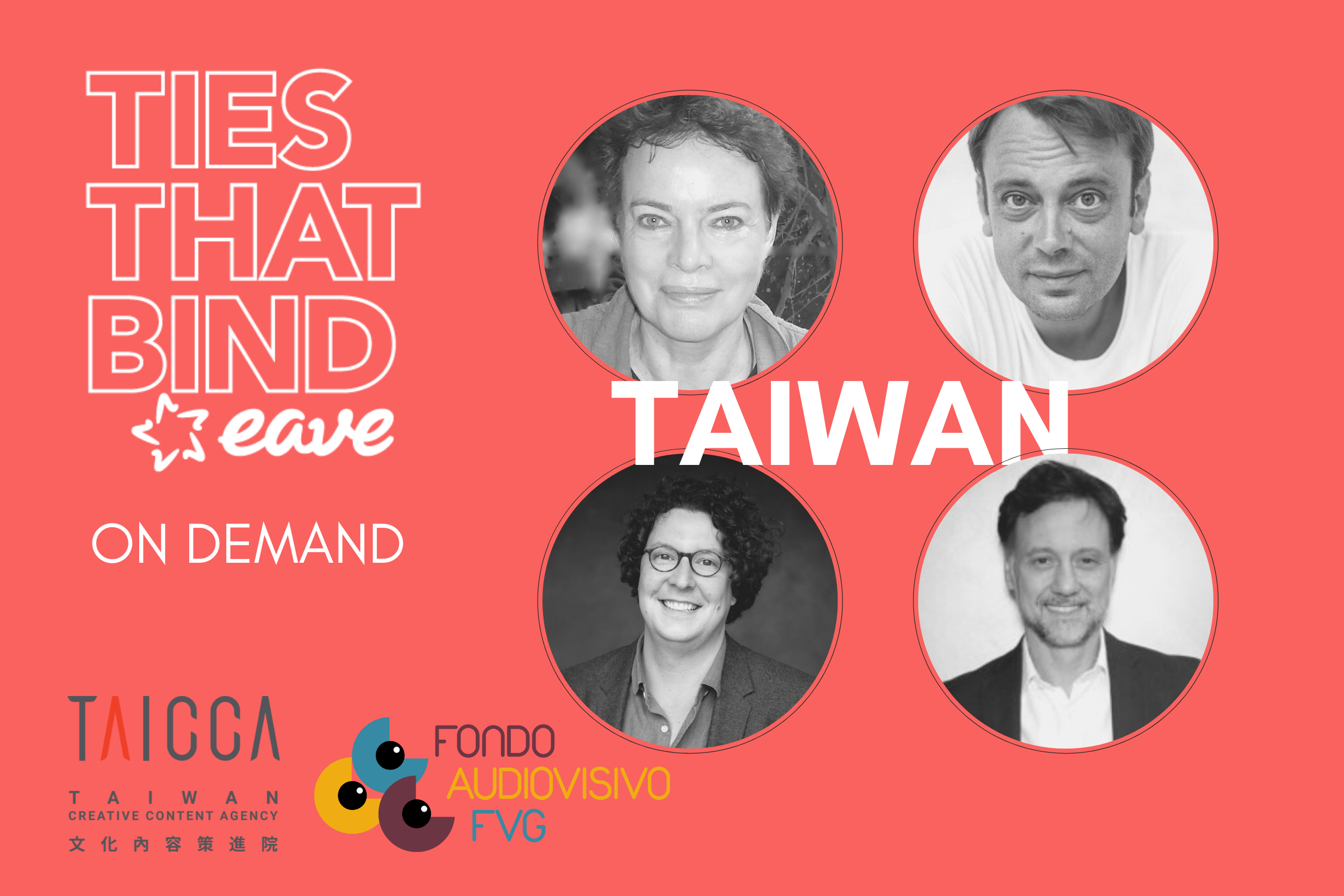 We are delighted to announce our first TIES THAT BIND ON DEMAND hybrid workshop in Taiwan in cooperation with Taiwan Creative Content Agency (TAICCA).

Clare Downs will elaborate on script development tools. Sales agent Nicolas Brigaud-Robert will give insight into the international market, while Christophe Bruncher will focus on production opportunities in Europe and Asia. During the group work sessions, the participants will analyse each other’s projects from the script, sales and financing perspective under the guidance of experienced TTB group leader Jonas Weydemann. The participants will also meet all experts in individual meetings.

The following participants were selected for the workshop: