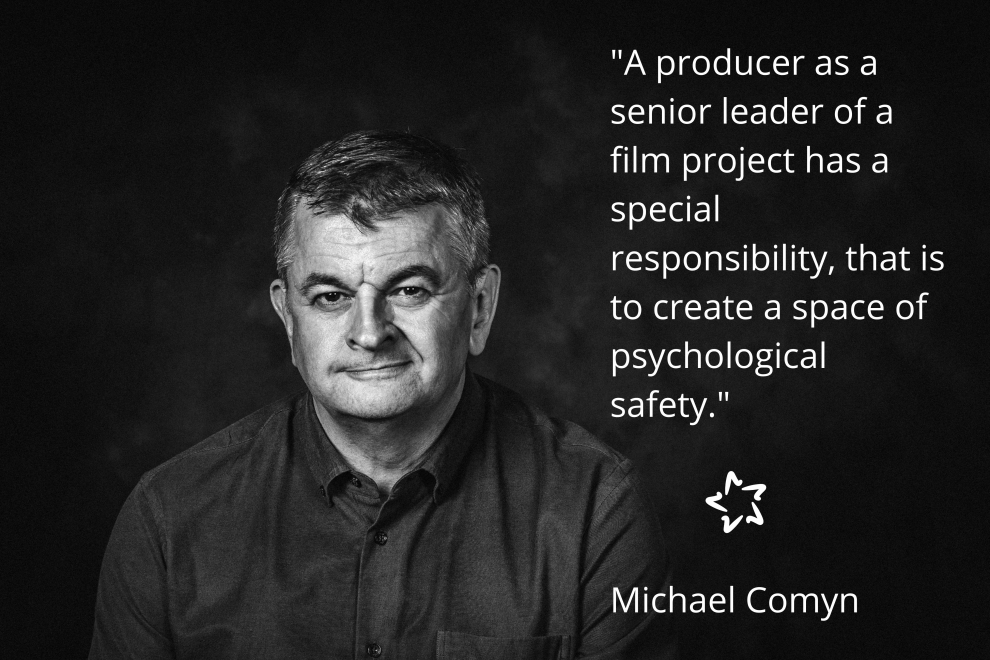 You are teaching film professionals and producers in resilience. Do they need that more than people from other branches?

I don’t know if they need it more than anybody else. Everybody needs an element of resilience. And if you think about what resilience actually is – for me it’s the ability to postpone a reaction. If you are triggered, if you have an emotional reaction to something and you’re able to create a pause, and if you are able to reconnect with your brain in that pause, then you are resilient. Persons who have the ability to avoid the triggering effect of emotions and who are able to stop, check and validate and then make a response are described as being resilient. The other thing they can do is to test the reality of what’s happening around them. So they have the ability to look around them and say: „Hm, tell me more, I’m curious.“

What is the effect of that?

If you are a film producer for example, and you have an argument with a colleague, it could be likely that you have an emotional reaction and loose temper. Whereas if you are resilient, you may be able to step back and ask yourself why that person is feeling that this isn’t the most appropriate way to communicate today. A producer as a senior leader of a film project has a special responsibility for a project, that is to create a space of psychological safety. And when your team feels safe, psychologically, they are superb. And when they feel unsafe, they tend to a destructive behaviour, what we call dissocial behaviour.

The COVID-pandemic is very demanding for everyone. Some people are more effected than others, whereas some feel the difficulties they have more than others. Can you help both of them?

If you think of any process, be it COVID or any other challenge to our emotional stability, resilience is the power to remain effective in the face of heightened demands, to surmount organisational difficulties in a positive manner, and to adapt in the face of change. Resilience is the ability to handle disruptive change, bounce back and even excel in times of change and uncertainty, without acting in dysfunctional ways. Dysfunctional means all the things we’ve done during the COVID lockdown: watching TV or Netflix for hours and hours, eating junk food, not getting things done, the withdrawal from friends and family, sleeping too much or too little, drinking too much alcohol. We all did that and that’s ok. But the point is, that you need to get it through your system and stop it before you cease to be functional. And some people can cope better with adversity than others.

Would you say that resilience is something that makes you able to put more load on your shoulders?

Yes it can, but it shouldn’t be. I was working with a group of doctors. And one of them was very angry. Their manager had sent them on this program to make them stronger, and be able to work more. I have a moral issue with that. If you are using resilience training in order for people to take more shit in their life, then that’s not good. But my argument would also be: yes, if it’s done properly. If you use this power to good effect. But that’s not always the case.

So the problem is not to burn the candle on both ends.

Yes, and not in the middle either. The older and wiser you get, the more you realise that you shouldn’t do more but less.

How can you learn resilience?

You can either be brought up as a child in a resilient household, and you were brought up with love and affection, with an approch to a good award system, an element of generosity. If you have that you tend to be more resilient. You tend to have a stronger sense of self confidence, of self esteem and self concept. That would make a resilient child. If you don’t have that you can do coaching, you can observe other people, you can attend training programs, you can have sessions with a good psychotherapist. In other words: there is plenty of support system out there. What you have to be aware of, and that is always controversial, is that you also have to begin to recognise when you are being triggered, f.e. the effects of the media, of Twitter, Fox News, CNN, the daily news. Today at lunchtime I saw the TV news. And there were pictures of hospitals and doctors, of extra deaths and lockdown. All of that is triggering and starts the process, and if you are hungry, lonely and tired you have a full reaction to that. If you are not and you are resilient, you might able to see that the headline officer in the TV station today wants to make a sensational headline and so they have only found the news that will support their belief. – I don’t know, if you do, or how many people do that, how many have that considerate thought. Of: „I’m curious, Why would they do that?“ or „Tell me more.“

I’m not so considerate, I’m afraid.

So, it’s about balancing that. And with a couple of strategies you can fix that. And they include things like give a little bit of self-care, stopping, breathing, yoga, painting, art work. Whatever you want to do. But I like those to be taken on by somebody because of what they do in terms of they make us more resilient rather than as a distraction of what is upsetting you or a problem you haven’t dealt with. The things that make us wake up at three o’clock in the morning are undealt-with issues. What advice would you want to have waking up at three in the morning? Well: get up and deal with it. But you’ll discover that you can’t because the bank is closed or that person is not at work. So the best is to get some sleep so that you’re able to deal with it when you wake up again. And that sounds like: Oh, wow! Common sense is the phrase. But there is a huge shortage of something that is called common sense.

What sort of strategies are there?

The old paradigm when it came to stress management was time management training. And this was all about getting us to do more. There were filofaxes and things-to-do lists. But that was a little bit dysfunctional, that’s not really helping. One also had the idea to avoid stress. One tended to think life is a marathon, there was always a next thing to do. They were angry of downtime, they didn’t like to relax. A lot of people worked on the principle to work for the reward for things. And there was self discipline and the power of positive thinking. But all that does not work at all. What do we replace that with? Manage energy instead of time. Seeking stress. Life is a series of sprints. Purpose exeeds the performance. Include rituals in you life. Powerful engagement. This is a little summary of some of the strategies around resilience. So, it’s not really a trait, it occurs when there are numerous protective factors present in a person’s life. That’s where resilience comes from. 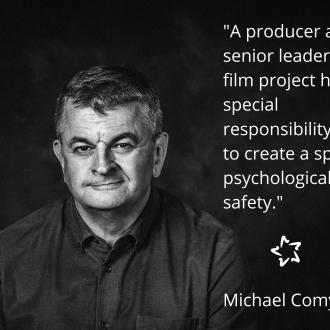 It’s a wrap for EAVE Producers Workshop Online Plenary Week – to be continued!