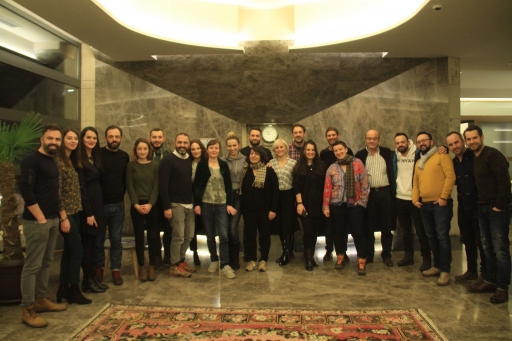 Kosovo Cinematography Center in partnership with EAVE is organizing a four-day long Development Workshop in Prishtina for producers and writers of 9 selected fiction projects with international co-production potential.

The aim of this workshop is script development and to improve the participants’ (co-)production skills, providing them with the necessary tools to succeed in the international market.
The workshop features high-level experts and will combine EAVE’s experience in training and creating international network with a tailor-made approach to Kosovar producers and each project’s specific needs.

The workshop will consist of Masterclasses, group work sessions and one to one meetings for the participant-producers and their creative teams.

Masterclasses will tackle topics such as: Producing the Screenplay, The Role of the Producer, Sales, Distribution & the International Market.

During the intense group work sessions and individual meetings the EAVE experts and participants will work together on script writing and script development, structural analysis/dramaturgy, relationship producer-writer/producer–director, budgeting and financial management, market and audience awareness, sales and distribution including the principles underlying these practices.

Roshanak began working in the film industry as a festival coordinator and production manager. In 1999, she started her first production company Flying Moon, together with Helge Albers and Konstantin Kröning. Until 2014 they produced arthouse films, with over 30 international awards, among them the German Film Award in Gold and the Prix Europe Iris.
In 2012, Roshanak ventured into Serious Games with LudInc and in 2014 she teamed up with Jani Thiltges and Claude Waringo, starting In Good Company in Berlin. The focus if IGC is on international coproductions, with an emphasis on European features, aiming to entertain on a smart level.
Roshanak also works as an expert and consultant for various institutions and training organisations such as EAVE. She is a member of the German Film Academy as well as the European Film Academy, an EAVE graduate and group leader.

After his studies at the NYU film school, Jacques Akchoti has worked in different areas of film production with directors such as R.Bresson, JJ. Beineix, L. Von Trier.
He then became a screenwriter, script consultant, and headed the development of many French and international films for cinema and television, which obtained selections and awards at major film festivals. Most recently, “A Screaming Man” by Haroun Mahamat Saleh, recipient of many awards, notably the Jury Prize at the 2010 Cannes Film Festival.
He has directed a feature film for television and written several screenplays. One of his latest script, “Don’t Look back”, a film by Marina De Van featuring Sophie Marceau and Monica Bellucci was part of the Official Selection of the 2009 Cannes Film Festival.
Jacques has been teaching writing and directing at the Femis (National French Filmschool) since 1988 and has facilitated many international screenwriting and development workshops, among which EAVE, Sud Ecriture, DV8 films, Vision Cinema, Ekran, Interchange, Jerusalem Film Lab, etc.